Our editors pick the products & services we write about. When you buy through our links, we may get a commission. Learn more.

If you do a lot of driving then not having a jump starter in your car can be taking a big risk. A jump starter can be a lifesaver if you break down and you’re far from help or other vehicles with jumper cables. Having an air compressor within the jump starter means you can also fix tyre related issues. We’ve reviewed the best jump starters with air compressor here. 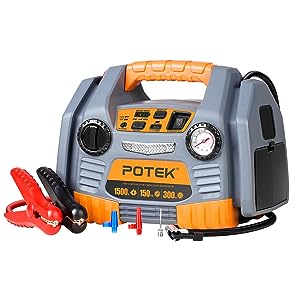 (4.3 / 5)
The POTEK JS88 jump starter is used for powering the battery in most passenger vehicles.
Check Price at Amazon

If you need a jump starter with a serious amount of power, the Potek JS88 may be the one for you. Though it is slightly larger, this has a 1500 peak and can even jump start a truck.

It is a lot larger than some other models, this is understandable due to the extra power. For rugged construction and a very powerful compressor, this model is well worth considering. It can also charge other AC electronic products so you could even use it for a heater or a fridge if you needed to.

If you need something to suit a large vehicle and spend a lot of time on the road then the Potek JS88 is a great option. However, there is also a smaller product, the JS87 also in the range, if you don’t need quite as much power. 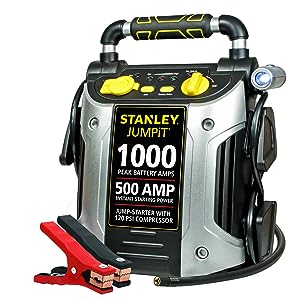 (3.6 / 5)
The Stanley J5C09 offers a safety switch and reverse polarity alarm, so the risks of doing something wrong are minimal.
Check Price at Amazon

Third on the list is a versatile jump starter from a big name manufacturer. If you’re looking for a product from an internationally renowned brand then the J5C09 from Stanley is worth checking out.

Similarly to the other products listed this has both plenty of power and the ability to be used as a charger for other items, too.

The STANLEY J5C09 Jump Starter has all you will need to get most cars back on the road again and plenty of top features, even though it is quite a large jump starter.

There is a USB output to charge other devices. The Stanley also offers a safety switch and reverse polarity alarm, so the risks of doing something wrong are minimal. 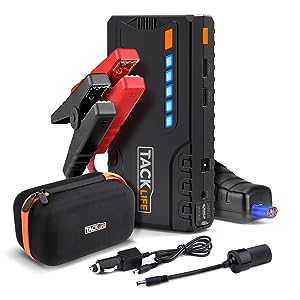 If you’re looking for a versatile and cleverly thought out jump starter this Tacklife T6 is worth a second look. As well as being a brilliant and reliable jump starter it is packed with lots of other features.

Although it may be small, it is extremely powerful, and can jump start even vehicles with large engines.

All in all, this deserves its place on our list as one of the best jump starters and air compressors for its reliability and clever design.

All of its functions are fantastic, and even though the peak amps are only 600 this is enough for most of us. After all, it is the portable aspect that draws us in.

The manufacturers have also considered the battery and the fact we need to charge other things. Devices can be charged via the TACKLIFE T6 jump starter, and one full charge gives enough power to use 30 times without having to recharge.

On top of these benefits, it is also an extremely compact item which can even fit in some glove compartments. Therefore, it doesn’t take up valuable space in your trunk.

If you aren’t mechanically minded or do not know a great deal about cars, this can be confusing.

Each jump starter will have a rating for peak amps which is the highest amp rating which the jump starter can reach. They will also have a cranking amps rating, which describes their ability to jump start in cold temperatures.

Voltage is another rating which needs to be considered. Due to the fact that all car batteries have a voltage, you simply need to ensure that you have a matching voltage on your jump starter. Frequently this will be 12V.

Types of Battery and Compressor

When purchasing any sort of battery in the modern age it is worth checking if it is lithium-ion. This technology is far more effective and therefore allows for longer battery life. As a result, you require less charging, and less chance of being out of juice.

Although the compressors all have different mechanics behind them, the vast majority of air compressors on a jump starter work exactly the same way. The important thing from a consumer point of view is the PSI they can handle.

PSI is the pressure level of tyres, and while most tyres need around 30 PSI, some higher performance vehicles need a higher PSI.

The PSI rating and number of nozzles ( in case you need to charge multiple tyres at once ) are the main things to look at when deciding on an air compressor.

How to Use a Jump Starter Safely

Due to the fact that jump starters can be dangerous in the wrong hands, you will receive detailed instructions with your product.

To safely use a jump starter you must ensure both vehicle and starter are off first. Once you have done this, you connect the red (positive) clamp to the positive battery terminal. Then you connect the negative clamp to either a dedicated spot on your battery or a stable area of the car’s chassis. Turn your jump starter on. Once your battery has sufficiently charged, you can also start your vehicle.

You should regularly charge your jump starter to make sure it doesn’t run out of power when you need it. Most recommend checking the power levels every few weeks.

Recommendation of The Best Jump Starter

The Tacklife T6 is the product which is most suitable for the largest number of people. It has some awesome features such as being able to charge other items and even including a flashlight.

Additionally, the TackLife T6 is compact and simple to charge. Unless you are driving a huge truck, this is a wonderful option. It also has tonnes of exceptional consumer reviews.

All three of the products listed are great options. Why not go ahead and purchase one, making sure you have never stuck in danger on the road again? For a relatively small investment, a jump starter with air-compressor can be a lifesaver.